The VISION and mission of this project

The purpose of this website is to inform you of the history and development of the Sahaja Yoga Family Village Project, Devprayag now called “Nirmala Ganga Nagari”(Nagari meaning village).

Shri Mataji talked about her vision for this project on numerous occasions:

In 1996, Shri Mataji had already asked for land to be purchased on the banks of Shri Ganga. The purpose of this land was for Western yogis to have a place in India where they could live together collectively or retire. Unfortunately the land that was first purchased with Her own money was later found to be unsuitable, mainly because of its location. Shri Mataji had wanted land to be purchased near Devprayag, a small town in Uttarakhand in the foothills of the Himalaya where the rivers Alaknanda and Bhagirathi converge to form the holy River Ganga.

Vienna - 1996
“The good news is that Shudy Camp is about to be sold. It's only for a small amount, about 420,000 or so but, out of which 300,000 belongs to this Mr. C.P. Srivastava, but he said 'now what are we going to do with this money? You better take it - and you had one great desire to have some land near the River Ganges at the foothill of Himalayas, so buy that, it is very good'.

So as soon as this is sold out, we can buy that land, it's a very beautiful land along the River Ganges. It won't be, I don't know, the climate will be the same as you have here, but no snowing - without snowing. But summer time it will be little hot and I think you will like that. It's a land about 80 acres of land and I want to build there houses, small little houses for you, about two bedroom houses. Let's see what happens, and you all can own it if you want.”
Shri Mataji, Talk at Vienna Airport, 10 July 1996.

“Leaders also can shift more times than Ganges River can shift its course. So there is nothing like that. It's all on shifty sand we are standing, all the time, and your Mother is another one who tries all kinds of tricks. The reason is I want you to stand on rocks and this rock is emitting love, is emitting that Divine Love, and the joy of that love is really so beautiful. For example, people would like to have their separate bathrooms, especially Indians, suddenly they have become Britishers and Britishers have become Indians you know. Indians want to have their separate bathrooms - I don't know why, and uh, this is a very common disease with Indians. And it is also spreading to other people I feel sometimes that they want to have their separate bathrooms. In a collective life there is no need. You don't even know, if you ask me I won't even know if I have been to bathroom or not, just go there come back, finished. I have no time for all that.
In the same way you also should have a concept of a society which is living like a ocean, if ocean rises they rise, it falls they fall - just one unison of Love. I am expecting that kind of a society at the foothill of Himalayas, and I am sure you all of you will realise that, Himalaya being the Sahasrara of the world.
Luckily I wanted it to be done before the Sahasrara Puja and it is done, with the blessings of Himalayas I should say. The Himalaya is also like the Sahasrara where the Kundalini has risen, where the vibrations have come out, and in the sky you can see the vibrations. But this Himalaya is ruled by a wrathful God called Shiva - that's the dangerous part of it. So we have to be very, very careful. If we try to play around, if we try to take to hatred among ourselves, take to divisive methods, take to something that is not Sahaj, this wrathful God is sitting on our head.”
Shri Mataji, Sahasrara Puja, Cabella, Italy, 4 May 1997.

USA - 2000
“Also good news for you that I have bought a land at the foothill of Himalayas, very great, I think it's fifty-five, fifty-six acres of land.

Plus I have bought another land where we can grow, already you get also, very rare vegetables for the Ayurveda so that they can make medicines at a very cheap price for the use of people who are suffering, and who can get cured very easily.”

Shri Mataji, Talk after Diwali Puja, Los Angeles, USA, 29 Oct 2000.
​
Cabella - 2001
In 2001, when Shri Mataji talked once more about the project to Lothar Pfeifer, in her living room in Cabella, she was again very specific about the location. She said: “It has to be Devprayag", whereas the land that had been previously purchased in 1997 was located 120 km further north.

Calabasas, California, USA 2006.
In 2006 Shri Mataji was told about the situation and location of the land that had been purchased in 1997 and that it had been in the wrong location.
The late Lothar Pfeifer also informed Shri Mataji about a plan to acquire some new land and start the Sahaja Yoga village project near Devprayag. Her comment on this was “Well done”.
​

Our Mission is to actualize the vision of Shri Mataji for this great land. Along with that is our role as Yogis to protect the area from exploitation, give Self Realization to the people in the area and teach the locals how to farm organically and in a sustainable way.

Thus there are various components to this project. Click below to get brief overview about these various aspects of the project. To Learn more about these aspects go to the project history and evolution page.
Sahaja yoga family village on mountain bandhalu
This Village is going to be the retirement place for western Sahaja Yogis. There are various town houses that are under construction. The village would have a Meditation Hall that can accommodate 500 people, a museum dedicated to Shri Mataji and a small apartment for Shri Mataji. There would be a playground and other collective areas as well. The vision for this village is not only to serve the Sahaja Yogis living there but to help the local economy and people as well and for it be a place for world collective to enjoy. There would be an arts and crafts center for international exhibits and agriculture project to empower the local village community.
​Nirmala Ganga Ashram
Situated in area near Vyasghat (15 km downstream from Devprayag) Ganga Ashram is place for Visiting Sahaja Yogis to stay and experience Shri Ganga. Learn more about this place by going to page dedicated to Ganga Ashram.
​Sahaja Yoga Meditation Center in Devprayag
Sahaja Yoga meditation Center in Devprayag is the center for Sahaja collectivity ​and for organizing local public programs. Learn more about this place by going to page dedicated to Devprayag Center.
​Future Meditation and Treatment Center
​This is a piece of land 1 km upstream (towards Devprayag) from Ashram bought by society. Goal is to develop meditation and treatment center for the world collective in future. 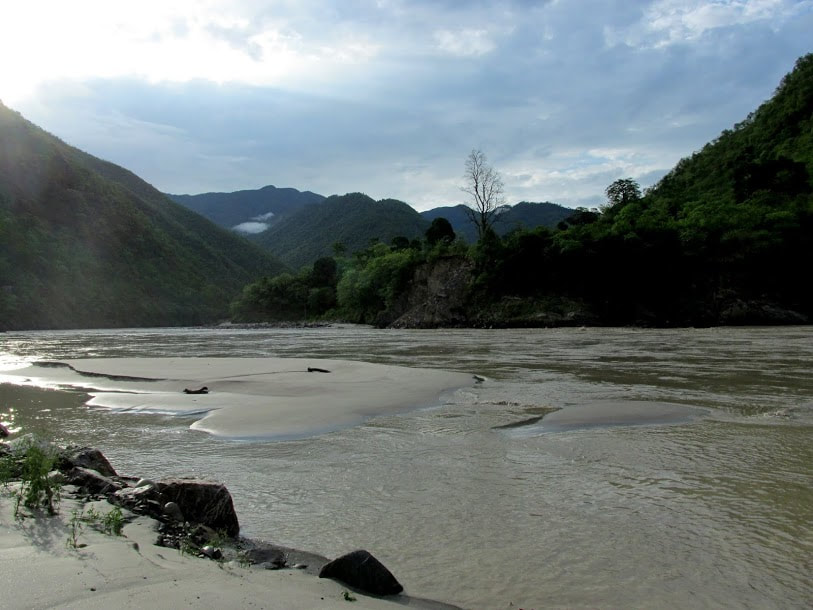