Lothar started the search for this new land that same year, 2006. It took three visits of 3-4 months to find the appropriate piece of land near Devprayag. In September 2009 some local farmers finally agreed to sell a large area of suitable land and in November 2011 this land transaction was finally registered.
In 2014, after many attempts, the appropriate legal framework for the project was put in place and the Shri Nirmala Ganga Mata Sangha Society was finally registered on Shri Mataji’s Birthday, 21st of March 2014. The Society manages the land. It has a 30 years lease on the land. In 2016 another society in the name of Sahaja Yoga Society was registered. This Society has the legal right to purchase land. All the leased plots are in the process of being registered under the Sahaja Yoga Society.
Learn more by browsing below and view these project presentations : -

​Location of the Village

​The project is located 15 km downstream from Devprayag, 800m from the village of Vyasghat. The area around Vyasghat is very ancient and historical. At Vyasghat, Shri Ganga starts forming a perfect Omkara. With the first bend of the OM, Shri Ganga encloses a land which in olden times was called Brahmapuri, the congregation of the deities.  Sage Vyas established his ashram there; the locals call it 'Puja Land'
Click here to access google earth 3D view of the village
This area is the only part of the Himalayan Ganga where the National Highway 58 is not audible.

The climate of the area is subtropical - no snow or ice.

Shri Mataji said:  "It's a little hot in summer, but you will like it".

The Sahaja Yoga village is located on the top of a hill with a panoramic view of Shri Ganga, majestic green valleys and the ancient Shivalik Mountains of the Himalayas.
​
We have the chance to gradually expand - up to 80 acres of land - which is actually the whole hill. As of now, the Society owns more than 8 acres. Until now we have been blessed with stable land prices, but for how long this will last we can’t say. It seems quite possible that land could become more expensive as construction progresses.
Construction 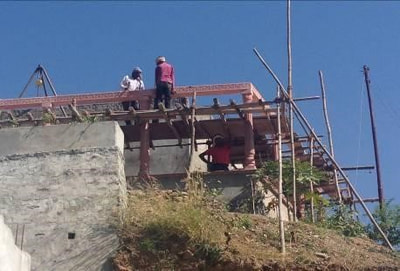 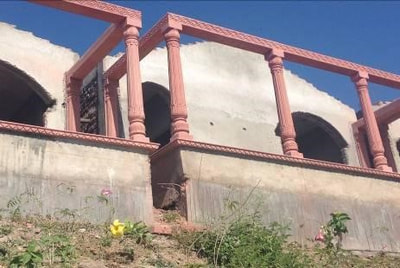 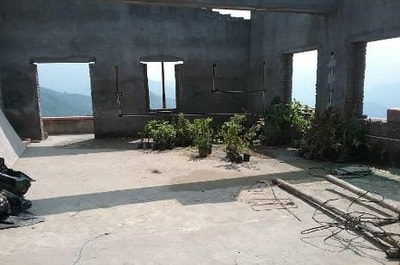 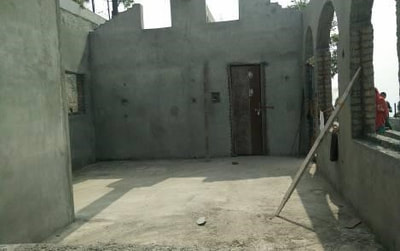 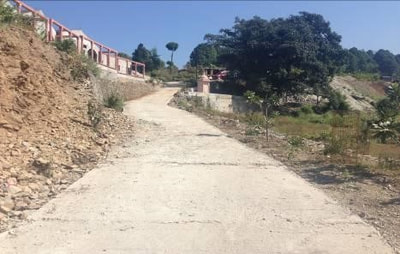 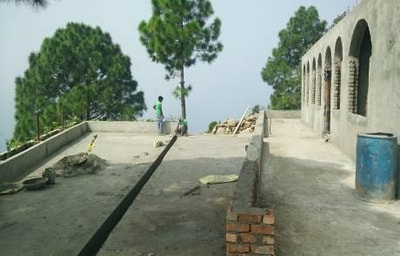 ​The overall plan is to build townhouses/row houses as well as single or multiple family homes. The exact layout will depend on yogis’ chosen plot. All houses will be owned by the Society, so no 'private' property in the Western legal sense. As of now, there are 25 parties, with 55 people involved in the project.
The contractor goes at whatever speed we need, depending on the number of houses needed.
The building of the houses will be ongoing as and when yogis join the project.


The Society leases the dwellings to the initial members as a lifelong lease. Houses can be freely shared by lease holders with any Sahaja yogis for year round occupancy and enjoyment. The lease is inheritable, but only if the children are Sahaja Yogis. Leases can also be given to countries, if a country decides to have a national house at the village. The lease holder will pay for the land, the construction costs and costs for collective facilities. 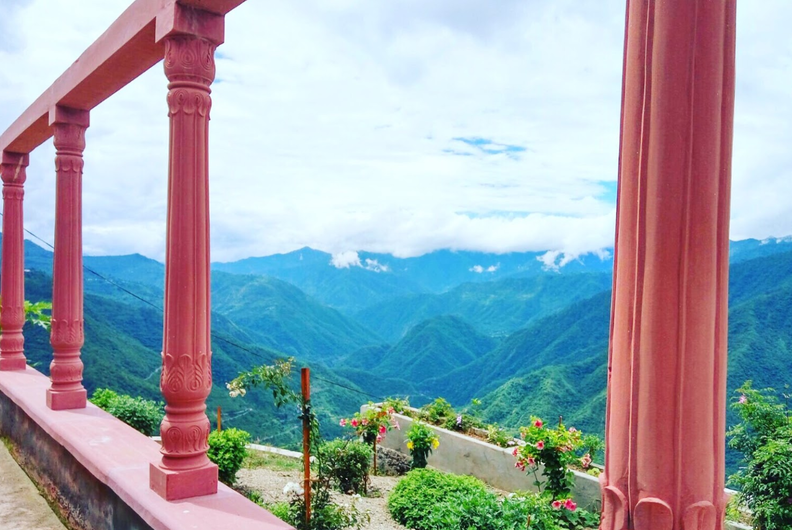 Sandstone pillars - They are in a traditional Rajasthani style like Shri Mataji used in all Her constructions. The sandstone comes from a village in Rajasthan where they have been doing sandstone work for hundreds of years and have a tradition of carving sandstone.
N.B. The current price and wages development in India makes for an increase of construction costs of around 15% per year. There is a possibility that land prices will increase as well.
Meditation Hall
The current design is two floors in Rajasthani pink sandstone style.

Top floor - A meditation hall for 500 people, plus a museum dedicated to Shri Mataji and a small apartment for Shri Mataji. It will have nice views and a veranda. Access to the meditation room will be from the top so no need for a ramp.

​Ground floor - Apartments for people who only want to buy one room and for visitors. Collective kitchen and storage place. There will also be a play-ground and other collective areas outside.
Arts and Crafts – A center for world arts and crafts is also part of this project, where artists can come, share and exhibit.

Agriculture Project – the Vision
​The project includes an extensive agriculture component including horticulture, livestock and fishponds. The aim is for the village to sustain itself as much as possible. The conditions for all these are very good. There is a possibility of two harvests per year, there is no frost and large areas of agriculture land are available for purchase.
The plan is to import high quality planting materials from various parts of the world. The agriculture will be 100% organic with the latest standards of western technology.

Shri Mataji wanted yogis to start agricultural projects and in Pune they have a farm growing Basmati Rice with vibrated water as suggested by Her. She also grew huge sunflowers and other produce in her gardens in Pratishthan and in Italy. When Shri Mataji built Pratishthan She asked yogis to bring plants, fruit and nut trees from all over the world for Her garden.

We know the importance of eating organic, clean food, not just for our health but for the vibrations of our Nabhis as well.
​ Poultry Farm - Currently under construction at the top of the Village near the workshop.

Starting the Agricultural project
20 acres of land needs to be purchased in order to begin to test different plants and growing techniques.
This is a Collective project that needs support in many areas.

​As the opportunity arose, the Society secured another piece of land very close to Shri Ganga, 1 km upstream from the ashram. The vision is of a future meditation and treatment center for the world collective.


Yogi’s can help this project by coming, sharing ideas and experience,
helping, spending time and enjoying!
​ Jai Shri Mataji!
Join the Cause!